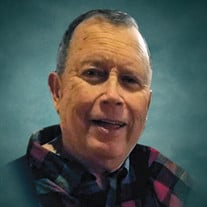 Toney Wayne Poole Sr. (age 70) of Covington, GA passed away peacefully on September 27, 2018. Toney was born on July 10, 1948 in Augusta, GA to Ernest Poole and Syble (Clay) Poole and was the eldest of 3 brothers. Toney served in the Army and was deployed to Vietnam where he served his country faithfully until his return home. Toney was married to his wife; Janice Lynn (Thompson) Poole, for 48 years until her passing in April 2018 and was the beloved father to 3 children. Toney enjoyed spending his time fishing, playing the guitar, researching genealogy, and working on computers. He worked as an electrician and cyber-tech for companies such as Saint-Gobain, Mobil, and the Savannah River Site before his retirement. Toney is survived by his children Joni Leonard, Christina Poole, Toney “Wayne” Poole Jr., son-in-law Mike Leonard, daughter-in-law Pam Poole, 4 grandchildren Christopher Poole, Michaela Roberts, Alexia Poole, and Ethan Leonard. Toney is also survived by his 2 younger brothers: Marvin Richard “Rick” Poole and Ernest Michael “Mike” Poole as well as a sister-in-law Shirley Poole of Grovetown, GA and Harlem, GA, 3 step-siblings, and many nieces and nephews. At his passing he is reunited with his wife; Lynn, his parents Ernest and Syble, and many loved ones. The Poole family would like to invite all who wish to say their goodbyes, to the public viewing at Wheeler Funeral Home on October 5, 2018 from 6:00pm – 8:00pm. The funeral will take place on October 6, 2018 at 11:00am at Wheeler Funeral Home with Pastor Jeff Shelton officiating; interment to follow at Lawnwood Memorial Park in Covington, GA. A short viewing will be held one hour prior to the service as we prepare him for our final goodbyes. Toney is being cared for by the staff of Wheeler Funeral Home, 11405 Brown Bridge Rd. Covington, Ga 30016. The family has asked that any flowers or expressions of sympathy be sent to the funeral home in preparation. Guests may sign the online register at www.wheelerfuneralhome.com.

Toney Wayne Poole Sr. (age 70) of Covington, GA passed away peacefully on September 27, 2018. Toney was born on July 10, 1948 in Augusta, GA to Ernest Poole and Syble (Clay) Poole and was the eldest of 3 brothers. Toney served in the Army and... View Obituary & Service Information

The family of Toney Wayne Poole Sr created this Life Tributes page to make it easy to share your memories.

Send flowers to the Poole family.