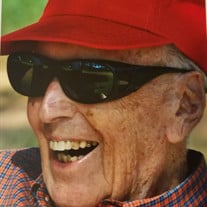 Simon P. Smith, 98, of Covington, GA, passed away on Thursday, February 15, 2018. Mr. Smith was born in Henry County in the Snapping Shoals Community to the late Luther and Elizabeth Piper Smith. He was a member of Mt. Zion UMC in Hapeville, GA, and served in the US Army during WWII under General Patton. Mr. Smith was a skilled rifleman with an M1, machine gun, and bazooka. His European tour started with the invasion of Normandy Beach, and ended with the liberation of Bergen-Belsen Concentration Camp. This was the camp where Anne Frank was held. He was on a ship headed to Japan for the anticipated invasion of the Japanese homeland when the “A-Bomb” was deployed. This halted his tour and he returned back home to Georgia. While in the service he earned a Good Conduct Medal, WWII Victory Medal, European-African-Middle Eastern Service Medal, and two Bronze Stars. Simon enjoyed playing the mandolin and harmonica. He was a strong Christian family man with a passion for outdoor activities including camping. He was preceded in death by his loving wife, Mildred Tombin Smith; son, Terry Smith, and several brothers and sisters Simon is survived by his daughter Diane and Charles (Don) Walker of Covington; grandchildren, Scott (Jane) Walker of Sharpsburg, GA, Paulette Walker of Covington, and Michael (Ashley) Walker of Palmetto, GA; great-grandchildren, Wyatt, Grey, Wren, Abby, Ryan, Connor; sisters and brothers-in-law, Joyce (Tommy) Welborn of Covington, GA, and Helen McPherson of Covington, GA; along with several nieces, nephews and cousins. Funeral services will be held in the Chapel of Wheeler Funeral Home Saturday, February 17, 2018 at 3:00 pm with Pastor Randy Strickland officiating. The family will receive friends at the funeral home one hour prior to service. Guests may sign the online register at www. wheelerfuneralhome.com.

Simon P. Smith, 98, of Covington, GA, passed away on Thursday, February 15, 2018. Mr. Smith was born in Henry County in the Snapping Shoals Community to the late Luther and Elizabeth Piper Smith. He was a member of Mt. Zion UMC in Hapeville,... View Obituary & Service Information

The family of Simon P Smith created this Life Tributes page to make it easy to share your memories.

Send flowers to the Smith family.