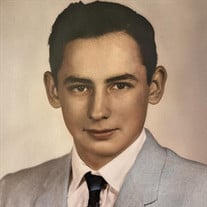 Ronald “Ronnie” Franklin Lewis, of Milton, WV, passed away Monday, October 4, 2021 in Conyers, GA at the age of 81. He was born in Milton, WV to the late Elmer, and Martha (Warsham) Lewis. Ronnie was a hard-working man. He retired from Huntington Alloys (Nickel Plant) after more than 30 years of service. He was a lifelong farmer who loved his cats, his dog Wendy, and raising his limousine cattle. Ronnie enjoyed hunting, fishing and camping. He will be missed by his family and friends. In addition to his parents, he was preceded in death by his son, Troy Lewis; his sister, Phyllis Huffstutler; half-sister, June Alexander; and half-brother, George Alexander. He is survived by his children, Ronda Pararas and her husband Bob, Angela Lewis, and DeAnna Joiner; grandchildren, Kaitlin Pararas, Alec Pararas, Miranda Marcum and her husband Brian, Brandin Lewis, and Anna Lewis; sister, Yvonne Poling; half-brother, Robert Alexander; several nieces and nephews. The family would like to thank his special friends Dawn and Greg Lanham, as well as Micheal and Tim Lambert for being a positive presence during his later years in life. A Service will be held in Ona, WV at a later date. Online condolences may be made at www.wheelerfuneralhome.com.

The family of Ronald "Ronnie" Franklin Lewis created this Life Tributes page to make it easy to share your memories.

Send flowers to the Lewis family.