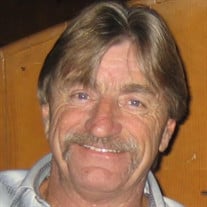 Robert Byron Reeves, age 65, of Covington, Georgia, died on July 9, 2020 after fighting a courageous battle with cancer. He was born on February 12, 1955 to Marilyn Buckley and William Reeves in Albuquerque, New Mexico. Robert was one of five children. Though Robert was born in Albuquerque, NM, his family didn't live there for long. As a child he lived with his family in Pueblo and Black Forest, CO, Salt Lake City, UT and finally in Central and St. George, UT. While living in Southern Utah he participated in 4-H riding the family horse. Robert loved to ride horses and excelled at it. He loved attending rodeos and listening to country music. In 1974, he moved back to Albuquerque to live with his grandparents and ended up graduating from Del Norte High School. Robert enjoyed being out on the open road so after high school his step-father Dale Hall taught him the truck driving trade and he soon landed a job driving trucks for Norm Howard. Robert had a passion for riding Harley Davidson motorcycles. He would often say it was his motorized horse. He felt free and easy when riding the byways of the great Smoky Mountain range in Tennessee, North Carolina and Florida. Later in life, Robert owned and operated his own roofing business in Jacksonville, Florida where he met the love of his life, Bonnie Pertoso at a church meeting. Robert was very persistent in catching Bonnie's eye. He was so happy to be able to find his soul mate and share the remaining days of his life with her. They married in May of 2008 on a beach in Florida. Following their wedding ceremony they rode off into the sunset on his Harley Davidson. At that time he became a stepfather to five wonderful children and 6 grandchildren. Both Robert and Bonnie were devout followers of Jesus Christ and trusted in His redeeming power. Robert and Bonnie moved to Covington, GA in 2011 to be closer to family. There Robert went to work for the Kroger Corporation. He enjoyed his time working for Kroger and developed strong friendships with many associates. While in Covington, he and Bonnie completed Bible Information Class and made their confirmation promises at Abiding Grace Lutheran Church on Christmas Day, 2012. Robert is survived by his wife, Bonnie Reeves of Covington, GA; his five step-children Jason Pertoso, Emily Pertoso Portanova, Natalie Pertoso Cavin, Andrea Pertoso and Micheal Pertoso and six grandchildren Abby Pertoso, Nathan Pertoso, Isabella Grace Pertoso, Jace Pertoso, Ethan Portanova, and Ella Portanova; his mother Marilyn Hall of St. George; his siblings, Marilyn Irene Reeves of St. George, David (Laura) Reeves of St. George, and Patricia Smith of Las Vegas, NV; and many nieces and nephews. Robert was a treasured husband, son, brother, step-father and grandpa. Robert was preceded in death by his father William Reeves, his brother Daniel Reeves, his step-father Dale Hall, his step-brother Gary Hall, his nephew Brant Smith, and his grandparents. A memorial service will be held at Abiding Grace Lutheran Church at 2pm on Wednesday, July 15th, 2020, followed immediately by interment at Honey Creek Woodlands Natural Cemetery. In lieu of flowers please send donations to Abiding Grace Lutheran Church 5500 highway 212 Covington GA 30016. Due to the current COVID-19 regulations, our staff is committed to taking care of our guests and families that we serve. Please understand we will be following the State’s COVID guidelines. We also ask all guests and family members attending visitations and services to please bring and wear a mask.

Robert Byron Reeves, age 65, of Covington, Georgia, died on July 9, 2020 after fighting a courageous battle with cancer. He was born on February 12, 1955 to Marilyn Buckley and William Reeves in Albuquerque, New Mexico. Robert was one of five... View Obituary & Service Information

The family of Robert Byron Reeves created this Life Tributes page to make it easy to share your memories.

Send flowers to the Reeves family.