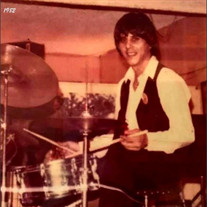 Robert F. Gugliuzza, 77, passed away on Friday, September 18, 2020, at his home in Conyers, Georgia. Bobby was born in Lockport, NY to the late Joseph and Loretta (Caruso) Gugliuzza. He was a loving husband, father, grandfather, a friend to everyone he met. Bobby was a U.S. Marine, attached to the 2nd Marine Aircraft Wing, VMF AW-235 Death Angels. He proudly served his home and country during the Vietnam Conflict. Bobby was passionate about everything he did. Music, cooking and his art work are where his true talents shown forth. His deepest passion was Jazz music. He played Jazz drums in many cities while on tour, but his fondest memories were the many years he spent playing in the clubs on Bourbon Street, New Orleans, with many local, national and international musicians. His second love was the piano at which he was truly creative. Bobby was also a master chef, and was inspired on a daily basis about his cooking. He worked as a chef at the Jazz Showcase in West Palm Beach, Florida, as well as a sous chef in a 5 star restaurant in Palm Beach. Bobby focused on his artwork late in life, and his art work reflects his deep passion for life, love and the beautiful world around him. Bobby was truly a renaissance man, and will be deeply missed. Bobby is survived by his wife Dianne (Kloman) Gugliuzza, his children; Robert Jr. (Maria) Gugliuzza, Andrew Gugliuzza, Loretta Gugliuzza, Joseph (Denise) Gugliuzza, grandchildren Christopher, Kyle, Zachary, Maya, brother Joseph Gugliuzza, the mother of his children Tina Gugliuzza and many other family and friends. Condolences may be left at the online register at www.wheelerfuneralhome.com.

Robert F. Gugliuzza, 77, passed away on Friday, September 18, 2020, at his home in Conyers, Georgia. Bobby was born in Lockport, NY to the late Joseph and Loretta (Caruso) Gugliuzza. He was a loving husband, father, grandfather, a friend to... View Obituary & Service Information

The family of Robert F. Gugliuzza created this Life Tributes page to make it easy to share your memories.

Send flowers to the Gugliuzza family.