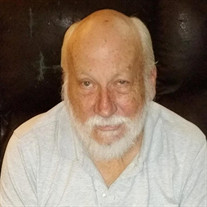 Click Here to View Richard's Graveside Service Richard Allen Burr, 79, of Covington, passed away Saturday, February 13, 2021 at Augusta University Medical Center. Richard was born on May 28, 1941 in Meriden, CT to the late Allan LeRoy and Edith Evelyn (Pender) Burr. He graduated from the Georgia Institute of Technology in 1968 with a Bachelor of Science degree, and from there enrolled in the Officer Candidate School in Pensacola, FL. Mr. Burr served as a Navy intelligence officer supporting an A-6 fighter/bomber squadron while deployed on the USS Ranger (CV-196), an aircraft carrier deployed to Vietnam between November 1969 to May 70. Mr. Burr’s service in that capacity would earn him a Navy Commendation Medal with valor. Mr. Burr resigned from active-duty military service after the end of the war, but later joined the Navy Reserve. After living again in his home city of Meriden for several years and working with his father at Burr Electric, he moved with his family to Covington, GA, next door to his in-laws Aubrey and Lillie Simms. Mr. Burr made a career in commercial insurance as a Loss Control specialist, working for Wausau, Allstate, Northbrook, and finally Royal Insurance before retiring in 1996. In 1994, after having attained the rank of Commander in the United States Navy Reserve, Mr. Burr retired having completed 7 years active-duty service and 20 years in the reserves. It was during his retirement that Mr. Burr was able to indulge in his passion for woodworking and gardening. For the past two decades, he has been known locally as Mr. Blueberry, for his blueberry farm with over 300 bushes that he opened to the public each year. Mr. Burr is survived by his wife, Alma Jo (Simms) Burr of Covington; son and daughter-in-law, Stephen and Anna (Baucom) Burr of Monroe, NC; siblings, Randall Burr of Rochester, NY, Marla Burr of Nashville TN, and Gary Burr with his wife Georgia Middleman Burr of Nashville, TN, and also nieces, nephews, and cousins. A private viewing will be held on March 27, 2021, in the chapel of Wheeler Funeral and Cremation Services. Internment will follow at Prospect United Methodist Church at 2:00 pm with Pastor Ron Compton officiating a graveside service. Guests may sign the online register at www.wheelerfuneralhome.com.

The family of Richard Allen Burr created this Life Tributes page to make it easy to share your memories.

Send flowers to the Burr family.