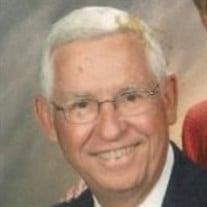 [To View The Live Stream of The Service Click The Link Below] https://view.oneroomstreaming.com/authorise.php?k=1643835761164199 Paul Ronald (Ron) Terrell of Social Circle, went home to his heavenly Father on January 31, 2022. He was 83. Ron was born in Atlanta, GA on March 28, 1938 to Paul Lee and Mary Howell Terrell. Raised in Atlanta, he attended Fulton High School where he met, fell in love and later married his high school sweetheart Patsy Dobbs. They raised 3 boys. Ron was a graduate from Georgia State University. Ron had a distinguished career in the corporate world where he spent most it working in the automobile industry retiring from Chrysler Corporation in 1996. He owned several successful small businesses. For many years Ron owned child care centers and a self-storage facility in Covington. He was a kind and polite southern gentleman, a delight for anyone to be in contact with. Ron was genuine, kind and humorous and always displayed a smile and positive Christian spirit. He lived his entire life in Georgia but his favorite place to relax was with Patsy at their condo in Panama City Beach where they spent many vacations. Ron was a devoted husband, father, grandfather, great grandfather, brother, uncle and friend to many. He was a member of Shiloh United Methodist Church. Ron enjoyed celebrations and gatherings with his family, loved being at the lake, enjoyed fishing and traveling. But most of all he loved his wife of 66 years, Patsy. He was preceded in death by his parents, Paul Lee Terrell, Mary Howell Terrell, and sister-in-law, Sarah T. Terrell. His survivors include his loving wife, Patsy Terrell of Social Circle, GA; sons, Andy Terrell of Bradenton, FL, Don Terrell (Martha) of Oxford, GA, and Jay Terrell (Sharon) of Monroe, GA; grandchildren, Dane Terrell (Meghan) of Greensboro, GA, Drake Terrell (Samantha) Eatonton, GA, Drew Terrell (Kathryn) of Oxford, GA, Morgan Burner (Austin) of Newnan, GA, Blake Terrell of Savannah, GA, Brett Terrell of Athens, GA; great grandchildren, Maci Terrell, Madeline Terrell and Meadow Grace Terrell; brother, Ret. Capt. Jerry L. Terrell of Jacksonville, FL. A Celebration of Life will be held Friday, February 11, 2022 at 11 am in the Chapel of Wheeler Funeral and Cremation Services with Pastor Jonathan Scharf officiating. The family will receive friends one hour prior to the service. Condolences may be sent to www.wheelerfuneralhome.com. In lieu of flowers donations may be made to St. Jude Children’s Hospital at www.stjude.org/donate.

[To View The Live Stream of The Service Click The Link Below] https://view.oneroomstreaming.com/authorise.php?k=1643835761164199 Paul Ronald (Ron) Terrell of Social Circle, went home to his heavenly Father on January 31, 2022. He was 83. Ron... View Obituary & Service Information

The family of Paul Ronald (Ron) Terrell created this Life Tributes page to make it easy to share your memories.

Send flowers to the Terrell family.