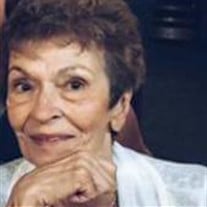 Margaret Brown, aged 81, passed away peacefully on August 27th, 2016 after a yearlong struggle with cancer. Margaret was born January 27th, 1935, in Cleveland Ohio, the daughter of Evan and Matija Trebotich. She grew up in Parma Ohio, proud of her Croatian roots. Margaret went to Western Reserve University majoring in English, and worked as a model, sold real estate, and even worked for Roadway trucking, where she retired. She married her loving husband Robert Brown in 1965, and raised two daughters and two sons. She was very active in her St. Anselm Parish community in Chesterland, Ohio, and was also a social magnet, hosting the annual “Tacky Tupperware Party” and various political get togethers and fundraisers. She was a resourceful, positive influence in her community. Margaret was a softy for any person or pet that needed a home, and her home was always a refuge for anyone that needed it. She felt that raising her children, who grew up with goats, horses, and a variety of other wayward critters, to be caring sensitive people, was the most important job that she had. She moved to Conyers Georgia with her husband who has preceded her in death, and where she lived until this day. She enjoyed her grandchildren, swimming, and traveling, having just taken a cruise back to Croatia 2 years ago with her childhood friend. She often went on layovers with her daughters when they had interesting ones, such as Kiev, Paris and Santiago. Margaret was a solid friend, mother, grandmother and sister to everyone she met and she will be missed. Margaret is survived by her daughters Sharon Butler, and Lori Ledbetter, as well as by her sons Eric Brown and Aaron Brown. She also leaves behind her daughter in law Leesa who she loved as a daughter. She was blessed with grandchildren who remember her fondly: Rory (20), Erin (19), Cheyenne (19), Bret (16), Peyton (15), Quin (14), Lexi (14) and Justin (8). She loved her step children David and Debbie as well as their children: Gregoire, Matthew, Christopher, Carolyn, Alexandre, and Michael. Margaret wished for a small personal service which will be held on October 21st at 11:00 at Georgia National Cemetery in Canton, Georgia where she will be placed to rest beside her late husband Robert. The family wishes to thank all of those who cared for her and supported her through this past year and who helped her live the beautiful life that she enjoyed

Margaret Brown, aged 81, passed away peacefully on August 27th, 2016 after a yearlong struggle with cancer. Margaret was born January 27th, 1935, in Cleveland Ohio, the daughter of Evan and Matija Trebotich. She grew up in Parma Ohio, proud... View Obituary & Service Information

The family of Margaret T Brown created this Life Tributes page to make it easy to share your memories.

Send flowers to the Brown family.