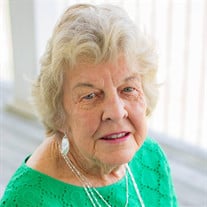 Lucretia Margaret (Meany) Welling, of Conyers, GA went to be at home with her Lord on Saturday, September 15, 2018, at the age of 82. She was born in Matamoras, PA to the late John Meany, Sr. and Dorothy (Simmons) Meany. Lucretia was a loving mother, grandmother, and sister, and a friend to all. She attended St. Pius X Catholic Church in Conyers, GA and was a former member of St. Augustine Catholic Church in Covington, GA and Queen of Angels Catholic Church in Thomson, GA. A 1954 graduate of Matamoras High School in Matamoras, PA, Lucretia ventured to Binghamton, NY and earned her credentials as a Registered Nurse from Binghamton City Hospital School of Nursing in 1957. She served others in various nursing capacities throughout her 50-year career, earning many awards and accolades along the way. The last 20 years of which, she was the Evening House Supervisor at Newton Medical Center in Covington, GA. Known as “Seish” to her family, she enjoyed golfing, going gambling and traveling. Courtesy of the US Navy, she and her family moved frequently and over the years lived in Guam, Florida, Illinois, California, Massachusetts, Pennsylvania, New Jersey, Panama and Hawaii. They settled in Georgia in 1980 and have called it home ever since. Lucretia’s calling to serve others also extended to the Catholic Church through the ministry of taking care of priests as a mother figure and friend in their lives. She will be dearly missed. Lucretia is survived by her daughter, Karol Welling, of Peachtree City, GA; son, Richard (Stephanie) Welling, Jr., of Marietta, GA; grandchildren, Kaitlin Welling and Brooks Welling; brother, John (Kathleen) Meany, Jr., of Terre Haute, IN; sister, Mary Rita (David) Cortright of Matamoras, PA; and numerous nieces, nephews and cousins. A Funeral Mass for Lucretia will be held at St. Pius X Catholic Church, 2621 Hwy 20 SE, Conyers 30013, Friday, September 21, 2018 at 12:30 pm with Father Paul Flood officiating, and assisted by Father Michael Redden, Father Walter Foley, Father Stephen Lyness and Monsignor John Walsh. Family and friends attending the funeral are encouraged to wear blue, her favorite color. Burial will follow at 2:00 pm at Honey Creek Woodlands (a natural burial ground located across the street from the Monastery of the Holy Spirit). Ladies are advised to bring sensible shoes to wear graveside. A reception will be held at the Parish Hall at St. Pius X at 3:00 pm. In lieu of flowers, memorial donations may be sent to the Monastery of the Holy Spirit, 2625 Hwy 212 SW, Conyers, GA 30094. Guests may sign the online register at www.wheelerfuneralhome.com. Wheeler Funeral Home and Crematory, 11405 Brown Bridge Rd., Covington (770) 786-7111.

Lucretia Margaret (Meany) Welling, of Conyers, GA went to be at home with her Lord on Saturday, September 15, 2018, at the age of 82. She was born in Matamoras, PA to the late John Meany, Sr. and Dorothy (Simmons) Meany. Lucretia was a loving... View Obituary & Service Information

The family of Lucretia Margaret (Meany) Welling created this Life Tributes page to make it easy to share your memories.

Lucretia Margaret (Meany) Welling, of Conyers, GA went to be...