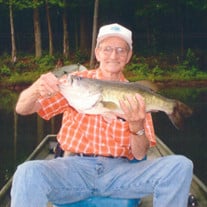 Lloyd Homer Brooks, 89, of Covington, passed away Tuesday, January 18, 2022 at Piedmont Walton Hospital. He was born in Etowah County, AL to the late Dewey and Annie Hill Brooks. Lloyd was a devoted husband, father, PaPaw, brother and friend to a host of many. He was a member of Porterdale Baptist church and he enjoyed fishing. Lloyd proudly served his country in the U.S. Air Force during the Korean War. He was preceded in death by his mother, Annie Hill Brooks; father, Dewey Brooks; step-mother, Beatrice (Bee) Brooks; wife of 53 years, Barbara Brooks; sister, Mary Middleton; and brothers, Vernon Brooks and John Brooks. His memory lives on and will be cherished by his sons and daughter-in-law, Randall and Delisa Brooks of Lawrenceburg, IND, Kevin Brooks of Covington, GA; grandson, Michael Brooks of Lawrenceville, GA; brother and sister-in-law, Curtis and Diane Brooks of Rome, GA; and step-brother, Eddie Minton of Gadsden, AL. In lieu of flowers, donations may be made to Social Circle Nursing & Rehab Attn: Donna Jackson Activity Director, 671 N. Cherokee Rd, Social Circle, GA 30025 or email Donna [email protected] Condolences may be sent to www.wheelerfuneralhome.com. No services are planned at this time.

The family of Lloyd Homer Brooks created this Life Tributes page to make it easy to share your memories.

Send flowers to the Brooks family.