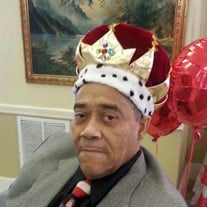 Lawrence "Chubby-Pops-GP(GOD Property) Brown Sr entered into eternal rest on Saturday, November 18,2017 at Rockdale Memorial Hospital in Conyers, Ga. He was born on August 21, 1948 to the late Rosabell Brown and Henry Jolla. He was the most... View Obituary & Service Information

The family of Lawrence Brown Sr created this Life Tributes page to make it easy to share your memories.

Send flowers to the Brown family.