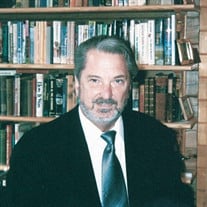 Jerry Maggard Lawson, of Covington, passed away Tuesday, at Emory University Hospital at the age of 79. He was born to Charles R. and Louise (Newton) Lawson. He was extremely proud of being a Seventh Generation Texan. Jerry began his newspaper career in 1962 after being discharged from the ARMY. His first job was with the Tyler Courier Times in Tyler, TX. From there he took a job with Harte Hanks Newspapers in Marshall, TX, then on to the Dallas Morning News in Dallas, TX. In 1969, he started his own publications company. When he got ready to mail out his first newspaper he had $.35 cents in his pocket. One customer believed in him so much they gave him a check on the spot to cover the ad they had placed. He was able to cash the check, mail out the newspaper, and the rest was history. His publishing career was on its way. Jerry was well traveled. He loved exploring, being in the woods, and going to the Florida Keys scuba diving. One of his favorite places was being home at Red Oak Ranch entertaining his friends and loved ones and taking care of animals. Jerry was very well read, reading up to three books every week. Jerry was preceded in death by his parents, Charles and Louise Lawson; brother, James Lawson; sisters, Peggy Wells and Betty Rose Fason; and daughter, Sabina Lawson. His memory will forever be cherished by his loving wife of 40 years, Cynthia Van Vynckt Lawson of Covington, GA; children, Charles “Chuck” Lawson (Melanie) of Centennial, CO, Suzanne Hill (Mike) of Atlanta, GA, Renee Lawson (Scooter Garmon) of Taylorsville, NC, William Lewis (Meghann) of Valorico, FL; grandchildren, Hannah Bearden of HI, Matthew Bearden of Boulder, CO, Richard Lawson, of Nashville, TN, Sara Gable of Sandy Springs, GA, Chayce Lawson of Centennial, CO, Grace Lawson of Tampa, FL, Caitlin Lewis, Michelle Lewis; great grandchildren, Lilikoi Scarcella of HI, Amina Boone of Sandy Springs, GA, Emma Lawson of Centennial, CO. The family will receive friends at Wheeler Funeral and Cremation Services, Saturday, January 29, 2022 from 4:00 pm – 6:00 pm. Guests may send condolences to www.wheelerfuneralhome.com.

Jerry Maggard Lawson, of Covington, passed away Tuesday, at Emory University Hospital at the age of 79. He was born to Charles R. and Louise (Newton) Lawson. He was extremely proud of being a Seventh Generation Texan. Jerry began his newspaper... View Obituary & Service Information

The family of Jerry Maggard Lawson created this Life Tributes page to make it easy to share your memories.

Jerry Maggard Lawson, of Covington, passed away Tuesday, at Emory...

Send flowers to the Lawson family.