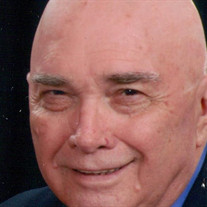 Jerry L Garner, 84 of Covington, passed away at home on Saturday, April 6, 2019. Jerry was born in Antioch, Arkansas to the late Roy and Faye Gasaway Garner. In addition to his parents he is preceded in death by his wife Mary Shaffer Garner, siblings Paul Garner and Carolyn Garner Pitts. Born in Antioch, Jerry grew up in nearby Beebe. He was the eldest of five kids. Upon finishing High School he joined the Air Force as an aircraft mechanic. Four years later he was selected to be in the initial Air Force Flight Engineer class. This decision defined the rest of his working life as he would spend most of it traveling the country and the world. About that time he would meet and later marry his lifelong partner, Mary. This partnership continued and fluorished for fifty eight years until her death in 2015. Jerry and Mary had two sons together, Christopher who was born in 1965 and Keith, born in 1972. Jerry was a loving husband and father to Mary and the kids. He loved doting on his granddaughters Hailey and Maggie and when the very large need arose, along with Mary, took them into his home and took on the role of caretaker. This he did with love and without complaint. He enjoyed long and loyal friendships with so many he encountered in his flying days and elsewhere. Especially noteworthy was the friendship and brotherhood he shared with a group that met on Monday nights at dinner, following his wife’s passing. Jerry treasured their time together. He was a gifted storyteller.Jerry will be missed but lives on in our hearts.He is survived by his sons and daughters in law Chris and Kris Garner, Keith and Sharon Garner, grandchildren, Hailey Garner, Maggie Garner, Jake (Kayla) Dempsey, Sarah Dempsey, and great grandchildren Kohen, Kaiden Dempsey, brother Charles (Judy) Garner, and sister Liz Stemmley. In lieu of flowers donations can be made to: https://donate.lls.org/lls/donate. A Memorial Service will be held Thursday, April 11, 2019 at 11:00 am in the Chapel of Wheeler Funeral and Cremation Services, 11405 Brown Bridge Rd, Covington, GA. 30016, with Rev. Joe Peabody, Sr. officiating.

Jerry L Garner, 84 of Covington, passed away at home on Saturday, April 6, 2019. Jerry was born in Antioch, Arkansas to the late Roy and Faye Gasaway Garner. In addition to his parents he is preceded in death by his wife Mary Shaffer Garner,... View Obituary & Service Information

The family of Jerry L Garner created this Life Tributes page to make it easy to share your memories.

Jerry L Garner, 84 of Covington, passed away at home on Saturday,...

Send flowers to the Garner family.