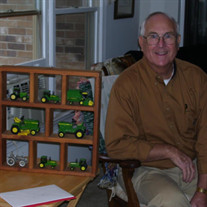 Not sure what to send?

James “Jimmy” F Jones, aged 85, passed away peacefully Tuesday, May 10 at The Oaks of Ashton Hills Assisted Living facility in Covington, GA. Jimmy was surrounded by family, along with the awesome, loving individuals from The Oaks Assisted Living community, as well as, the Southern Grace Hospice family. He is preceded in death by his wife, Ann H (Huber) Jones and parents, David Parker Jones and Marilu (Pritchett) Jones. He is survived by his son and daughter-in-law, George and Phyllis Jones; son, Jim Jones; grandchildren, Matthew Jones, David Jones and Ansley Jones; sisters, Marilyn Belcher and Rebecca Bialko and brother, Bobby Jones; several nieces and nephew. Jimmy was an unequivocally devoted husband to Ann, a loving father to his two boys, and a doting “Pop” to his three grandchildren. He was until recently an active member of the Crossroads United Methodist church in Conyers. He was also a former member of Shiloh United Methodist Church in the Almon Community. He loved being a part of the church, especially teaching Sunday School and assisting with many an annual BBQ. He loved listening to old gospel music. Jimmy was born in Edison, GA. He served in the Army for 2 years with an overseas appointment in Germany during that time. He attended Abraham Baldwin Agricultural college and completed his Agricultural Engineering degree at the University of Georgia. Jimmy retired from John Deere after 30 years of relocations around the southern states. His last move was to Conyers in 1972 and he and Ann finally settled in Oxford, Ga to enjoy retirement. He was also an avid John Deere and Georgia Bulldog fan/collector. A Celebration of Life well lived, will be Saturday, May 21 at 3pm at Wheeler Funeral Home, 11405 Brown Bridge Road, Covington, GA . Visitation will begin at 2pm with a service to follow at 3pm. Donations in his memory can be made to Crossroads United Methodist Church, 2460 Hwy 138 NE, Conyers, GA; or Shiloh United Methodist Church, 10 Almon Church Rd, Covington, GA.

James &#8220;Jimmy&#8221; F Jones, aged 85, passed away peacefully Tuesday, May 10 at The Oaks of Ashton Hills Assisted Living facility in Covington, GA. Jimmy was surrounded by family, along with the awesome, loving individuals from The Oaks... View Obituary & Service Information

The family of James "Jimmy" F Jones created this Life Tributes page to make it easy to share your memories.