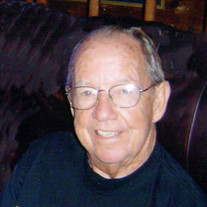 Grover Griffith Carnes, 94 of Covington, passed away Tuesday, February 25, 2020, at Rockdale Healthcare in Conyers GA. Grover was born in Greenville SC to the late Henry Walter Carnes and Elsie Walker Carnes. In addition to his parents, he is preceded in death by his twin daughters Becky and Bonnie, his granddaughter Ashli Carnes, 8 siblings and mother of his children, Olive Phillips Carnes. Grover was a loving husband, father, grandpa, brother, and a good friend to so many. He proudly served in the US Navy, and was a WWII Veteran. Later on he went in business with his brothers, and was the VP of Carnes Brothers Floor Company. Grover was an active member of The Church Covington for over 18 years, and worked as a wonderful servant for the Lord. He enjoyed traveling and his trips to Panama City Beach. Grover was the past Potentate of the Yaarab Temple in Atlanta, GA and was a 33rd Degree Mason. He was a humble man with a very outgoing, humorous personality. Grover made a big impact because he lived a big life and will be greatly missed. Survivors include his loving wife of 25 years, Ann Carnes; son and daughter-in-law, Charlie and Toni Carnes; daughter and son-in-law Tracie and Tad Kaczor; grandchildren, Amy (Jeff), Adam, Jessica and Samantha; great-grandchildren, Jackson, Connor, Kaitlyn and Owen; many nieces and nephews. A Memorial Service will be held on Saturday, March 7, 2020 at 1:00 pm at The Church Covington with Rev. Darryl Hooper officiating. The family will receive friends one hour prior to the service. Condolences may be made online at www.wheelerfuneralhome.com. In lieu of flowers, donations may be made to The Church Covington, 11975 GA-142, Oxford, GA 30054

Grover Griffith Carnes, 94 of Covington, passed away Tuesday, February 25, 2020, at Rockdale Healthcare in Conyers GA. Grover was born in Greenville SC to the late Henry Walter Carnes and Elsie Walker Carnes. In addition to his parents, he is... View Obituary & Service Information

The family of Grover Griffith Carnes created this Life Tributes page to make it easy to share your memories.

Send flowers to the Carnes family.