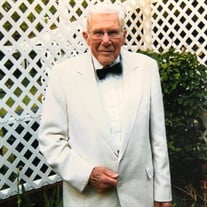 Goodwin Gheesling Tuck, MD 1923 – 2018 A long-standing and beloved member of the Covington and Newton County community, Dr. Goodwin G. Tuck, peacefully left this earth to touch the face of God on September 22, 2018. He was 95 years old. Known as Tuck, he was born in Greene County, on May 1, 1923 to Louise Littleton Gheesling and Reuben McDaniel Tuck. Growing up in Covington, he finished his early education at Covington High School. He was a life-long member of First Baptist Church and a member of Kiwanis International. His college education was interrupted as he served his county in the Medical Corp as a laboratory technician through the Army in the Philippines during World War II. Tuck attended Emory University at Oxford in Oxford, Georgia, the University of Georgia, receiving a Bachelor of Science in Microbiology and the Medical College of Georgia in Augusta, Georgia, receiving his Doctor of Medicine degree. He interned at the Charity Hospitals in Lafayette and New Orleans, Louisiana. Dr. Tuck came back to Covington to begin a practice as a general practitioner of medicine in the early 1950s. He was a founding physician at Newton County Hospital, now Piedmont-Newton. Many hospital staff members and patients will remember his whistling through the hallways as he made morning and evening rounds to see his patients. All knew when Dr. Tuck was on the floor! Dr. Tuck was a man of many interests and lived life to the fullest. He was an accomplished skeet shooter and huntsman. He was a DAWG! Woof Woof Woof! He found a contemplative joy in working with his succulents and cacti that began from a visit to the monks at the Monastery of the Holy Spirit. He was a ham radio operator and worked to pass his Morse code test in his seventies, that he said kept him getting his First-Class badge as a Boy Scout. His love of music expanded many genres—baroque, classical, big band, and jazz. He might be found in the living room with headphones directing the musicians on a record with a baton. Tuck was preceded in death by his wife of 48 years, Joanne (Joan) Malone Faulkner, as well as his parents and his brother Reuben McDaniel, Jr. His memory will be cherished by his wife, Wilma “Cheetie” Eleazer Halford, his three daughters, Janice Callaway, Lisa (Richard) Forbes, and Carey Bennett, four grandchildren, Jim (Amelia) Callaway, Ben (Lindsey Thomas) Callaway, Elizabeth (Hunter) Orvis, and Stephen (fiancé Kayla Vercande) Callaway, and three great-grandchildren, Charlie, Carson, and Henry (children of Jim and Amelia). Children by marriage include Ann (George) Burley and Gaines (Stacy) Halford and granddaughter Claudia Halford. Tuck, otherwise known as Grand Tuck by many, will be remembered for his witty humor. He confided that he hoped he had made a difference to at least one person’s life. Tuck, you were a true physician and friend to many. In lieu of flowers, please consider the following causes that were dear to Tuck’s heart. Historic Rural Churches of Georgia, Inc. is an organization that is helping with the restoration of identified old rural churches in Georgia, including the Concord Primitive Baptist Church that was the early church home of Goodwin’s wife Joan. To donate: go to www.hrcga.org In the comment lines, please note/designate the donation for Friends of Concord Church/Concord Baptist Primitive Baptist in memory of Goodwin Tuck. If mailing contribution, check would be made out of Historic Rural Churches of Georgia, Inc. Please note that this is for Concord Primitive Baptist Church on your check. The mailing address is Friends of Concord Church, Inc., 1914 GA Hwy 16 W, Monticello, GA 31064. Georgia Baptist Children’s Homes and Family Ministries is an organization that Goodwin contributed to over many years that provided care to children, youth, and families. To donate: go to www.gbchfm.org. If mailing contribution, check would be mailed to: Georgia Baptist Children’s Homes and Family Ministries, 9250 Hutchinson Ferry Road, Palmetto, GA 30268. Funeral services for Dr. Tuck will be held Tuesday, September 25, 2018 at 11:00 am at First Baptist Church of Covington. Interment will follow at Covington City Cemetery. The family will receive friends at the funeral home Monday, September 24, 2018 from 5:00 pm - 8:00 pm.

The family of Dr Goodwin G Tuck created this Life Tributes page to make it easy to share your memories.

A long-standing and beloved...

Send flowers to the Tuck family.