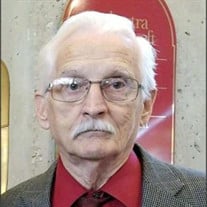 Gerald Lee Harrah, 81, died from a long battle with heart disease on December 04, 2021 at his home in Covington, Georgia. Gerald was the husband of Brenda Ellen (Gentry) Harrah for 59 years, he was the son of Wheeler Francis Harrah, Sr. and Madeline May (Peters) Harrah who preceeded him in death. Gerald was born in Everton, West Virginia on January 6, 1940. Mr. Harrah later moved to Oak Hill, West Virginia where he attended Collins High School. In 1957 Gerald joined the United States Air Force. He most notably served in Unalakleet, Alaska and Blaine, Washington as a radar operator. He was honorably discharged in 1961. He moved back to West Virginia and married Brenda in Scarboro, West Virginia in 1962. They remained together till his death. After marrying his bride, they moved to Newport News, Virginia where he worked in the shipyard as a welder on submarines. They then moved back to Scarboro where he was a welder on water towers, then to Huntington, West Virginia as a welder on rail tanker cars. In 1967, he moved to Atlanta, Georgia to work as a telephone installer with Southern Bell and later for AT&T until retirement in 1999. In 1972, he moved to a home he built himself in Conyers, Georgia. In 1985, He moved to Covington, Georgia where he self-built his last home where he had his homecoming to his Lord. His pleasures where gardening, woodworking, and construction projects. He was a long-time member of Zion Baptist Church and attended Gateway Community Church with his family when he could no longer drive. He was preceded in death by his mother and father Wheeler Francis Harrah Sr. and Madeline May (Peters) Harrah, father-in-law and mother-in-law Howard and Lois Gentry, brother-in-law and sister-in-law Robert and Norma Gentry, his brothers Thomas Harrah and Wheeler (Jack) Harrah Jr. and infant sister Shelby Harrah and his daughter Lee Ann Harrah Gilmon. He is survived by his wife Brenda Ellen (Gentry) Harrah of Covington, GA his son and daughter-in-law Michael and Tani Harrah of Covington GA, son and daughter-in-law Mark and Lorrie (Sharron) Harrah of Covington GA, son in law Charles Gilmon of Covington, GA. 6 Grandchildren Crystal Pastor, Holly Carey, Amanda Harrah, Mitchell Harrah, Magdelena Harrah, and Joshua Gilmon. 3 Great grandchildren Ezra Pastor and Madeline White and Liam Carey. His sister and brother-in-law Kay and Jeffery Williams of Evergreen, CO and his brother and sister-in-law Ronald and Betty Harrah of Peachtree City, GA. Services will be at Wheeler Funeral Home 11405 Brown Bridge Road Covington, GA 30016 Visitation Thursday December 16, 2021, from 1pm to 2pm Services Thursday December 16 at 2pm Interment at Zion Baptist Church Cemetery Pastor KP Pass of Gateway Community Church to Officiate This obituary was lovingly prepared and placed by the family.

Gerald Lee Harrah, 81, died from a long battle with heart disease on December 04, 2021 at his home in Covington, Georgia. Gerald was the husband of Brenda Ellen (Gentry) Harrah for 59 years, he was the son of Wheeler Francis Harrah, Sr. and... View Obituary & Service Information

The family of Gerald Lee Harrah created this Life Tributes page to make it easy to share your memories.

Send flowers to the Harrah family.