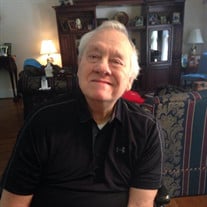 [To View The Live Stream Of This Service Click The Link Below] https://view.oneroomstreaming.com/authorise.php?k=1638396153151393 Fred Richard Schoenfeld, Sr., 86, of Oxford was born in Atlanta, GA to the late Fred and Martha (Noz) Schoenfeld. Fred “The Wizard” which many of his colleagues called him, died on Sunday, November 28, 2021. In addition to his parents, he was preceded in death by his wife, Carlee; great granddaughter, Emarie Hays; daughter, Mary Gresham, and brother, Wolfgang Schoenfeld. His survivors include his children and their spouses, Kenny Hays (Cindy), Martha Terrell (Don), Fred Schoenfeld (Renee); grandchildren and their spouses, Stephanie (David), Jason (Karen), Josh (Karen), Jamie, Jennifer, Dane (Meghan), Drake (Samantha), Drew (Kathryn), Larry (Heather); great-grandchildren, Jackson, Cole, Kylee, Nicolas, Hunter, Benjamin, Maesyn, Emersyn, Maci, Madeline, and Meadow Grace. Fred was a graduate from Fulton County High School and later graduated Magnum Cum Laude from Georgia Institution of Technology with a Bachelor of Science Degree. He was a member of the Sigma Phi Epsilon Fraternity. He also returned to GA Tech years later to be a professor. Upon graduation, Fred moved to Middleton, Ohio where he worked for Armco Steel Company for many years while earning his Master’s Degree from the University of Cincinnati. While in Middletown, Fred met and married Carlee Hays, his loving wife of 49 years before her death in 2009. Fred and Carlee moved back to Georgia where they raised their family of four children. Fred was a prominent Structural Engineer for 45 years before retiring from Heery International in 2005. “The Wizard” had many accomplishments throughout his career, including: 2005 – Lifetime Service Award in the Structural Engineering Profession 2009 – Excellence in Structural Engineering Award He designed the King and Queen Buildings in Sandy Springs, GA Rockdale Hospital in Conyers, GA The Dome in Atlanta, GA 1996 – Olympic Tennis Courts in Stone Mountain, GA Georgia Power Building in Atlanta, GA Several Delta Airplane Hangers in Atlanta and Orlando Airports Fred loved spending time with his wife, children, grandchildren and entire family. He loved to fish and camp. He was an active member of Abiding Grace Lutheran Church, where he professed his faith in Jesus Christ until his last breath. He loved being a Structural Engineer, and was a “Rambling Wreck from Georgia Tech” until the end. A Memorial Service will be held Monday, December 6, 2021 at 2 pm in the Chapel of Wheeler Funeral and Cremation Services with Preacher Jonathan Scharf and Lector Aaron Bush officiating. The family will receive friends one hour before the service time. Condolences may be sent to www.wheelerfuneralhome.com. In lieu of flowers, donations may be made to Abiding Grace Lutheran Church, 5500 GA-212, Covington, GA 30016.

[To View The Live Stream Of This Service Click The Link Below] https://view.oneroomstreaming.com/authorise.php?k=1638396153151393 Fred Richard Schoenfeld, Sr., 86, of Oxford was born in Atlanta, GA to the late Fred and Martha (Noz) Schoenfeld.... View Obituary & Service Information

The family of Fred Richard Schoenfeld Sr created this Life Tributes page to make it easy to share your memories.

Send flowers to the Schoenfeld family.