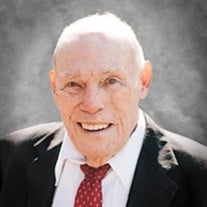 Donald Alton Wood born February 11, 1934, passed away peacefully on Wednesday, May 5, 2021. Don dedicated his life to serving his Savior, his family, and others. He is a long-time member of Zion Baptist Church, Covington, GA where he served as a Deacon for many years, was involved in mission trips, worked with youth groups, and served on numerous committees. Don was preceded in death by his loving wife of 65 years, Meriam Wood; daughter, Donna Hoffman; parents, Alton and Eunice Wood; siblings, Gene Wood, Larry Wood, Michael Wood, and Sandy (Homer) Foster. He is survived by his children Darrell Wood and Kim (Roger) Wilkinson; and son-in-law Doug Hoffman. Also surviving are his older brother, Mark (Loretta) Wood; in-laws Mary Hellen Burdett, Calvin Wise, and Brenda Wise. He was known as Gran Pa to his six grandchildren, Josh Stamey; Kayla (Codi) Dixon; Garrett, Kyle, and Alaina Wilkinson, and Jenni-Rose Hoffman, as well as his great-granddaughter, Kiernan Stamey. He is also survived by many nieces and nephews. Don had an over 30 year career with the telephone company, Western Electric, starting in 1954. He continued to work his way up, eventually retiring as an engineer with AT&T. Don was very involved with mission work through the Bold Mission Builders of the Stone Mountain Baptist Association where he helped to build and renovate churches all over the country. He was a “blue hat” with Georgia Baptist Convention Disaster Relief where he led a feeding unit to help feed people who lived in areas affected by natural disasters. In his free time, Don was an avid golfer and enjoyed playing as often as he could. He was a member of the Senior Golfers Association of Atlanta. His grandchildren were loved by him dearly, and he always supported them by being involved in as many of their activities as he could. Don and Meriam demonstrated a wonderful example of a Christ-centered marriage to their family and community. The service will be held on Monday, May 10, 2021 at 1pm at Zion Baptist Church located at 7037 Ga 212 Covington, GA with Rev. Joel Brown and Rev. Frank Daws officiating. The family will receive friends from 11am-1pm. Interment will follow immediately after the service at Zion Baptist Church Cemetery. In lieu of flowers please make a donation to Bold Mission Builders or Disaster Relief. Online condolences can be made at www.wheelerfuneralhome.com

Donald Alton Wood born February 11, 1934, passed away peacefully on Wednesday, May 5, 2021. Don dedicated his life to serving his Savior, his family, and others. He is a long-time member of Zion Baptist Church, Covington, GA where he served... View Obituary & Service Information

The family of Donald Alton Wood created this Life Tributes page to make it easy to share your memories.

Send flowers to the Wood family.