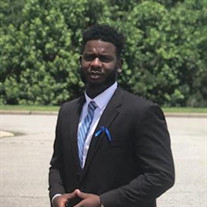 Deondre Nekale Fisher was born May 4, 1996 to Tamara Jones and Lafradus Fisher in Greenville, SC. He grew up in Fort Lauderdale, FL and later in Atlanta, GA with his beloved great grandmother, Helen McNeely, and his aunt, Sha-Kim Wilson. Deondre graduated from Georgia Youth Military Academy. Shortly after graduating, he joined the United States Army Reserve. He attended Gordon State College, Athens Technical College, and spent time at the University of Georgia. Deondre lived a robust life and is most known for his free spirit and brave soul. He lived by the beat of his own drum and was admired for always living life to the fullest. He was loved and cherished by so many. Deondre had an infectious high spirit and an energy that was truly indescribable. No matter what or where Deondre would always spread love and joy. His smile carried a brightness that could light up any space. To know him was an experience filled with love, laughter, and sincerity. Those left to cherish his memory are his mother, Tamara Jones; his father, Lafradus Fisher; his girlfriend, Jasmine Johnson; his beloved dog Chase; his brothers, Sha-Qwan Hagans, Sha-quell Fisher, Layfeatte Holloman, Jeremiah Holloman, Joquarious Fisher, Dequan Fisher, and Raja Fisher; his sister, Camille Smith; his nephew Masiah Fisher; his grandparents, Pamela T. Dawkins, Diane Fisher, and Rubin Jones; his aunts, Sha-Kim Wilson and Jade Harris (Stan); his uncles, Hassan Jones and Howard Thompkins; and a host of cousins, other relatives, and friends. He is preceded by his grandfathers, Paul Edward Buckley and Steven Dawkins, his uncle Raja Fisher, and his great grandmother, Helen McNeely. A Memorial Service will be held Saturday, July 17, 2021 at 11 am in the chapel of Wheeler Funeral and Cremation Service with Pastor Frank Johnson officiating. The family will receive friends one hour before the service.

Deondre Nekale Fisher was born May 4, 1996 to Tamara Jones and Lafradus Fisher in Greenville, SC. He grew up in Fort Lauderdale, FL and later in Atlanta, GA with his beloved great grandmother, Helen McNeely, and his aunt, Sha-Kim Wilson. Deondre... View Obituary & Service Information

The family of Deondre Nekale Fisher created this Life Tributes page to make it easy to share your memories.

Send flowers to the Fisher family.