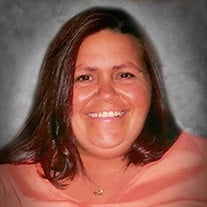 [This Service Will Be Live Streamed Through The Link Below https://view.oneroomstreaming.com/authorise.php?k=1644258908165124] Deborah Charlene (Baucom) Minix, 53, of Covington, Ga passed away Friday, February 4, 2022 at Piedmont Newton Hospital. Deborah was born in Conyers, Ga to the late Roy Gilbert Baucom Sr. and Patsy (Herrington) Hughes. In addition to her parents, Deborah is preceded in death by her two brothers, Roy Gilbert Baucom, Jr. and Ashley Baucom; brother-in-law, Glenn Wesley (Buzzy) Hughes; nephew, Adam Burch. Deborah had many hobbies that included crafting, wood working and sewing. She loved her animals, going to the beach and her tattoos. She was always putting others first and became a donor and gave someone else the opportunity to live. Deborah was a devoted companion, mother, daughter, nanny, sister, aunt, and friend to many. She was truly loved and will be deeply missed by many. Deborah is survived by her children and their spouse, Jacklyn (Steven) Carr of Covington, Ga; son, Phillip Andrew Banks, Jr. of Covington, Ga; Companion, Philip Banks, Sr. of Covington, Ga; six grandchildren, Gracie Carr, Hunter Carr, Kolby Banks, Levi Carr, Natalie Banks, and Tony Kenny; Sister, Teresa Hughes of Monroe, Ga; Stepfather, Robert Hughes of Covington, Ga; several nieces, nephews, and cousins. Funeral Services will be held Monday, February 7, 2022 at 2:00 pm in the Chapel of Wheeler Funeral and Cremation Services with Glenn Hughes officiating. The family will receive friends at the funeral home from 1:00 pm until 2:00 pm prior to the service. Interment will follow at Lawnwood Memorial Park. Flowers are accepted or donations may be made to the funeral home. Condolences may be sent to www.wheelerfuneralhome.com.

[This Service Will Be Live Streamed Through The Link Below https://view.oneroomstreaming.com/authorise.php?k=1644258908165124] Deborah Charlene (Baucom) Minix, 53, of Covington, Ga passed away Friday, February 4, 2022 at Piedmont Newton Hospital.... View Obituary & Service Information

The family of Deborah Charlene Minix created this Life Tributes page to make it easy to share your memories.

[This Service Will Be Live Streamed Through The Link Below
https://view.oneroomstreaming.com/authorise.php?k=1644258908165124]

Send flowers to the Minix family.