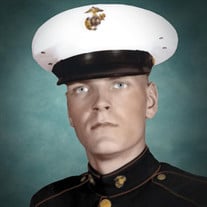 Billy Wayne Chadwell, 76, of Covington, passed away Friday, November 22, 2019 at Piedmont Newton. He was born in Mangum, OK to Lloyd Herman Chadwell and Mabel E. Waldroop Sadler. Billy proudly served his country in the U S Marines. His hobbies... View Obituary & Service Information

The family of Billy Wayne Chadwell created this Life Tributes page to make it easy to share your memories.

Send flowers to the Chadwell family.