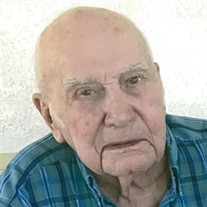 Archie Henry was born on October 27. 1927 to Dan Arch and Molean Gillis Henry in Baker Florida. His early years were spent farming and raising the food that sustained his family. He became the man of the house at age 12 and spent the next several years taking care of his sisters and mother. He had a total of six children. Three from his first marriage with Izola Maggie Baker; Diane, Kenneth (deceased), and Danny and three step children from his second marriage to Jean Gilstrap Longino; Mike, Donnie, and Chuck. He loved them all deeply. They will all miss him, with the exception of Kenneth, who greeted him at the door when he crossed over into heaven. He had many jobs throughout his life and was always recognized for his exemplary performance and conduct. He was a prized employee and won many certificates of achievement. Truck driving was his calling in life. Even in his last few days, he could recall all the routes, interstates, and back woods roads that he had ever driven. After retirement, his passion became his garden. He always worked, weeded, worried, and wondered if it would produce. It always did, it had no choice. Archie cared for and loved it like he did everything that he touched in life. He will be missed here, but the family has a painful peace knowing that he has laid down his burden and is now resting in the arms of the Lord. We love you Archie, Daddy, PawPaw, and Pops. We already miss you, but we have turned our hats around to make you think we are on the back already. Archie is survived by his loving wife Jean Henry sons; Danny (Michelle) Henry, Donnie (Julie) Longino, Mike Longino, Chuck Longino, daughter Dianne (Ronnie) Cotton, daughter-in-law Janie Henry, 15 grandchildren, Eric Henry, Clint Henry, Alexandria Henry, Joshua Henry, Tracey Arner, Erica Colley, Jason Cotton, Leni Longino, Rose Longino, Emily Longino, Bonnie Longino, Anthony Longino, Jennifer Polstra, Sara Murphy, Michael Gattis, and 12 great grandchildren Christian, Dylan, Verona, Cooper, Breyannah, Jarrod, Anna, Haley, Jeffery, Sophia, Cassandra, Joshua, sisters; Florene Howze and Eloise Hoffman, many nieces and nephew. A memorial service for Archie will be held Saturday, January 20, 2018 at 11:00 a.m. The family will receive friends from 10:00 a.m. to 11:00 a.m. at Wheeler Funeral Home, located at 11405 Brown Bridge Road, Covington, Georgia. Online condolences can be made at www.wheelerfuneralhome.com

Archie Henry was born on October 27. 1927 to Dan Arch and Molean Gillis Henry in Baker Florida. His early years were spent farming and raising the food that sustained his family. He became the man of the house at age 12 and spent the next several... View Obituary & Service Information

The family of Archie Daniel Henry created this Life Tributes page to make it easy to share your memories.

Send flowers to the Henry family.