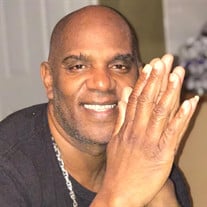 Antoney Curtis Samuels 59, of Covington passed away at Emory University Hospital on Tuesday, August 12, 2019. He was born in West Moreland, Jamaica to Edel Samuels and Khalite Davis Samuels. Antoney is proceeded in death by his father Edal Samuels and his grandchild Natavia Samuels. He is survived by his wife Althea Samuels, sons; Marcelus Samuels, Antoney Samuels Jr., daughters; Kaydene Samuels, Toni Samuels, Tiana Samuels ; mother Khalice Smith, brothers; Radcliff Smith, Paul Green, Dexter Samuels, Delory Smith, Richard Smith, Devon Smith, Rick Samuels, sisters; Sharon Binns, Dorthory Smith, Clair Smith. On Sunday, July 3, 1960, the most handsome baby boy was born to Khalice and Edel in the district of Big Wood in Westmoreland, JA. He was their pride and joy the first of 9 children. He grew up in the warm embrace of his grandmother Mabel. He attended the school Holly Hills All-Age School where he then graduated and moved on to Peters Field Training Center where he learned to be a Mason. Prior to this, one of his favorite past times was to farm. Early in his life he realized that problems were apart of life's curriculum, so instead of allowing himself to become a victim of his circumstances he mustered the courage and the determination to become a victor. In 1995 he migrated to the United States in search of the American dream and resided in New Jersey for better opportunities. In 2004 he then moved to Georgia and married Althea Samuels whom he has two daughters with by the name of Toni and Tiana Samuels. Prior to marrying Althea, he had 3 lovely children Marcelous, Kaydene, And Antoney Samuels Jr. These 5 children were the love of his life everyone who knew him can testify to that. Antoney was a great provider for his family he worked tirelessly to make ends meet. He has always been a family man and an excellent provider for his family. Throughout his life truck driving has always been his passion. He’s worked for several different trucking companies. However, that soon ended abruptly February of 2019 when he suddenly got ill with Multiple Sclerosis, and his wife Althea had to soon enough take care of him full time. Unfortunately, after multiple treatments and hospital visits, she noticed he was still declining in health. We later then found out in July of 2019 he was unfortunately misdiagnosed and really had Glioblastoma brain cancer. Funeral Service will be held on Saturday, August 24, 2019 at Wheeler Funeral Home 11405 Brown Bridge Rd Covington, GA. with Pastor Harrison Carolina, and Fred Curling officiating. The interment will follow the service at Lawnwood Memorial Park. The family will receive friends on Friday, August 23, 2019 from 6pm-8pm. Online condolences can be made at www.wheelerfuneralhome.com.

Antoney Curtis Samuels 59, of Covington passed away at Emory University Hospital on Tuesday, August 12, 2019. He was born in West Moreland, Jamaica to Edel Samuels and Khalite Davis Samuels. Antoney is proceeded in death by his father Edal Samuels... View Obituary & Service Information

The family of Antoney Curtis Samuels created this Life Tributes page to make it easy to share your memories.

Antoney Curtis Samuels 59, of Covington passed away at Emory...

Send flowers to the Samuels family.